Lotus Moon Illustration and an update on the finch chicks 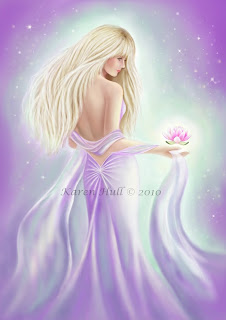 Lotus Moon
Commissioned Illustration
Corel Painter
Here is one of my latest commissions and also an update on the little finch chicks that I mentioned in one of my earlier blogs. Sadly, one of the chicks died a few days after my last entry. Then on the weekend, my Mum rang me in tears because her beloved cat had died suddenly, and since it has only been a couple of years since Dad died, her two cats were her constant comfort. Mum lives over 1000kms away, and my heart ached for her, so I jumped on a plane to pop up and give her a hug and some cheer, and left behind strict instructions with all the family on how to take care of the finch chicks. Sunday morning I rang the family to see how all was going, and they vehemently reassured me that they had followed my instructions to a 'T', but unfortunately the two remaining chicks died on Saturday night. I was so sad - they had reached the stage where they were covered in feathers apart from their head and they would sit up and chirp every time I walked past their little cage, but in the end it just wasn't meant to be! :(
Posted by Unknown at 12:44 PM 9 comments: 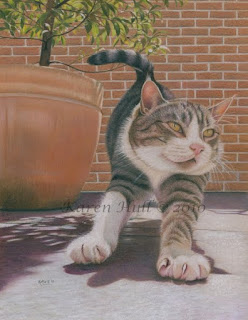 Even though I have enjoyed the challenge of working digitally lately, I didn't realise how much I missed by beloved coloured pencils until I started working on this portrait. It is lovely to work on something tangible and watch a blank canvas evolve before your eyes. I was a bit unsure about this portrait at first when I saw the reference photo, as the front paws loomed larger than life, but the client reassured me that he wanted it just like that. As, I got into the portrait, it was the look of sheer contentment that showed on Little Tood's face, as he enjoyed his long stretch, that struck me more than the paws in front, so hopefully this is apparent to others who view this portrait too.
Posted by Unknown at 1:49 PM 18 comments: 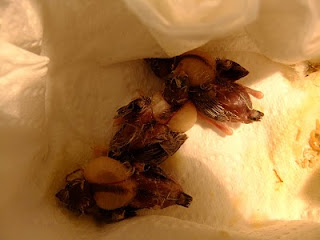 No artwork today - although I have several jobs on the go - none are ready to post.
My husband often muses how much more time I would have each day if we didn't have a menagerie of pets, but I love being surrounded by critters and tending to them never feels like a chore. Three years ago, we bought a pair of zebra finches for our aviary and every 6-7 weeks since they have produced a batch of between 3-7 chicks, which we give away to our local birdshop.
Zebra finches are such good parents and I would watch them in fascination, as they took turns in relay, tending to their young and feeding each other. Earlier this week, the mother finch died. She left behind a nest full of young chicks which the father finch valiantly tried to rear himself. I bought him a new girlfriend in the hope that she might help him out - but raising chicks wasn't her thing. Sadly, raising the chicks by himself took its toll on the father finch and three days later he died too. That left me to play the role of Mum Finch. When I retrieved the nest, there were actually five little chicks, but two had already died, probably from dehydration as the father just couldn't feed them near the end. So now I have been playing Mum Finch for three days, giving the chicks formula via a syringe every couple of hours, and so far so good!!! Fingers crossed, they will continue to do well and thrive. They do look a little ugly at this stage, but another week, when they are covered with feathers and they will look very cute. You can see the little sacs either side of their spine full of formula - (I probably over feed them a bit, but they seem to be doing well).
Posted by Unknown at 1:27 PM 11 comments: 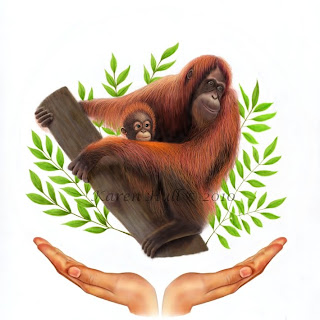 This is the second in a series of illustrations commissioned by the Coin Club of Australia for a series, which I can talk about more after the release date. It's funny how much more observant you become when you draw, paint or illustrate some aspect of our world. I always thought Orangutans were rather strange looking primates, but after researching them for this job I have a new appreciation for the glorious shades of red in their hair and their charming, human like qualities. Being an A type personality, having a busy, stressful job in nursing and raising four boys, I was often too busy before to stop and smell the roses and tended to rush through life without really SEEING things. Since allowing my art to become a much greater focus, I have a renewed appreication of the world around us and find myself studying tree trunks and sky colours, and people with interesting faces in a way I never would before.
Every single day I am grateful for the gift of art (and for my beautiful family)!!!
Posted by Unknown at 10:17 PM 8 comments: