A Platter for Two 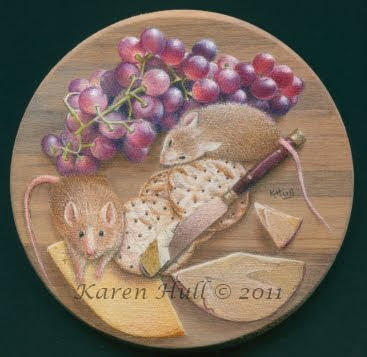 A Platter for Two
9.5cm
Coloured pencils and pan pastels on wood primed with colourfix primer
I have had one of those weeks one step forward, two steps back, and have had to start a couple of artworks over several times, due to lots of little problems. Anyway time is starting to run out, as the Australian Society of Miniature Art National Awards Exhibition looms closer and closer, so it was high time to get a couple of miniatures done. This was my third attempt at this one, as in my first two attempts, I underpainted with white acrylic, followed by clear Colourfix primer, only to find that the acrylic undercoat simply blended with the primer and created a smoky mess. This hasn't happened before, and so on the third attempt, I primed with white gesso and then the colourfix primer with a much better result. I love working with the clear gesso, but for some reason the tooth and texture gives me a rash where my hand is resting, and so I've gone back to the clear Colourfix primer which doesn't seem to have that effect. This little miniature was done on a timber coaster, which, surprisingly it took me quite a while to find. Again, you will notice that those little mice have trespassed into my artwork - just can't get rid of them!!! :)
Posted by Unknown at 8:55 PM 6 comments: Links to this post

What a Lovely Surprise 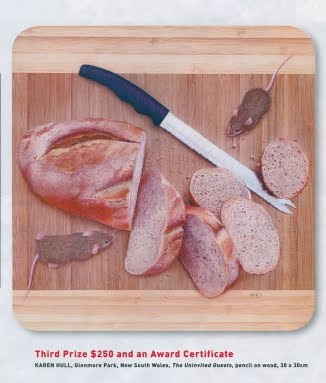 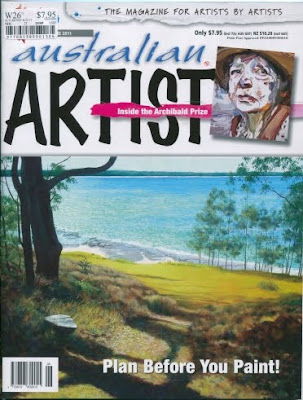 What a lovely surprise I received yesterday when one of my friends on RedBubble congratulated me on coming third in the latest Australian Artist's Art Competition for my artwork 'The Uninvited Guests'. I hadn't even realised. I bought this magazine for the first time a few months ago, although I should have subscribed to it years ago, as it truly is a wealth of information about art, artists, and exhibitions - so worthwhile. I entered the art competition on a whim, never really expecting to hear back, so this was a really lovely treat. I was also thrilled to be sharing the page with Elena Kolotusha, who's wonderful artwork I am so very familiar with, also from RedBubble and who was awarded second for her superb still life.
Posted by Unknown at 9:06 PM 3 comments: Links to this post

A Huge Thank you

Firstly a huge thank you to Thaneeya McArdle who featured my artwork on her site Art is Fun. It was via Dors Blog that I came across this fun and informative site so if you get the chance please do check it out. You will find some great art hints and gems and come across some other talented artists as well.

I recently submitted 4 artworks for entry into the Lethbridge 10,000 Small Scale Art Prize and was notified on Friday that the following two were accepted. This is the first time I have entered this exhibition and the standard of artwork is extremely high, so I was honoured to be included in the selection. 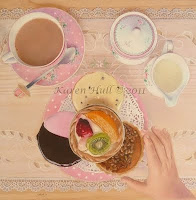 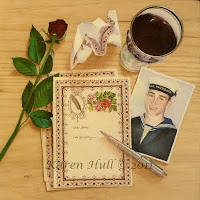 On a final note, I have had a pack of 18 Caran D'ache Pablo pencils for a while now. They are oil based pencils like the Faber Castell Polychromos but have a creamier texture, and are a real joy to work with. I decided last week to try and source the full set of 120, but as some of you may know these Swiss made pencils don't come cheap, and so it took me several hours on the internet to track down the cheapest set (within Australia). Prices can be as high as $600-$700 for the full set in a wooden box, however for any Australian artists interested in getting them at a good price The Art Shop just got some tinned sets in and sell them for $280 plus $9.95 postage and handling.
Posted by Unknown at 3:48 PM 12 comments: Links to this post 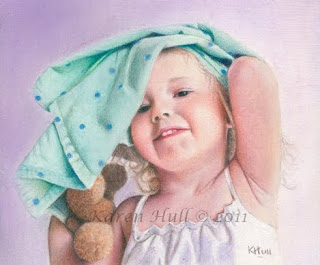 I See You
8cm x 10cm
Coloured pencils and Pan Pastels on Claybord primed with gesso
I am running out of time to get miniatures done for the upcoming National Awards Exhbition, so thought I should buckle down and get a few done, and this first one features one of my nieces, Bailey. Since I am enjoying working on the gesso with the coloured pencils, I thought I'd try it in miniature. I had some Claybord which is a bit too slick for the coloured pencils but primed it with the Gesso and this worked well. I would love to try Ampersands Gesso board as I'm sure it is probably slightly smoother than the surface I achieved by priming myself, but the Ampersand boards are quite hard to come by in Australia and are not cheap either. However, after trying this experiment, I might try and invest in some for future use. The other thing I tried here was to use the Zest-it pencil solvent to smooth the pencil grain down a bit. This seemed to work well and is also something I would like to explore further in future artworks.

Posted by Unknown at 12:27 AM 6 comments: Links to this post 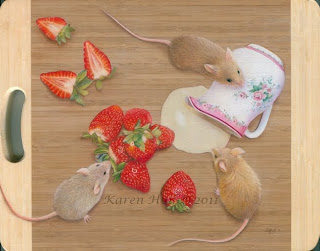 More of those pesky little mice - I know it might freak some of you out, but I actually really love them. The only two pieces I have done on the bamboo breadboards sold recently at an exhbition, and I must admit I really love working on this surface - the background has just enough depth of colour so that both darks and whites show up well and the grain is quite predictable and tight. As much as I love adding the mice in, it makes it difficult to work out which category to put them in for a lot of exhbitions, as this is not a Still Life and nor is it Portraiture, nor Landscape, so I plan to do my next few pieces with no little critters at all :)
Posted by Unknown at 7:23 PM 7 comments: Links to this post

Around the World in Eighty Seconds 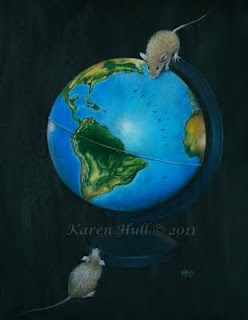 This artwork was lots of fun to do, but caused me a few headaches in the end. Initially, there was no writing on the globe and then one of my sons commented that he felt it needed some text on the globe. At this point, I had already sprayed with fixative and so the pencil really wasn't adhering to the artwork. I should have known better, but used one of my finest permanent markers to add some text. All was fine, as you can see here, until after scanning this, I sprayed another coat of fixative, at which point all the letters bled into the surrounding areas. At this stage, all I could do was use a damp cloth and remove that whole section and start again. Thankfully this worked Ok, although the ocean now has a slightly more uneven colouring, which I suspect from miles away is how the earth would look anyway. We live and learn!!! :)
Posted by Unknown at 3:44 PM 11 comments: Links to this post