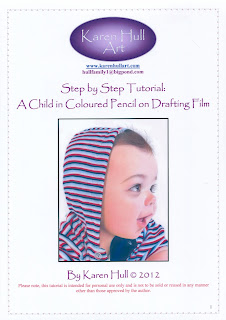 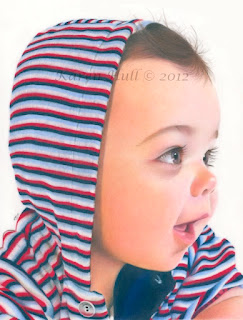 This latest 8x10 inch artwork is my darling little nephew Chris and was drawn with coloured pencils on drafting film. This time I used Faber Castell Polychromos on Grafix Dura-lar which gives a lovely smooth, translucent look to your portraits. You can purchase the 21 page comprehensive step by step tutorial from my website at http://www.miniatureartbykhull.com/tutorials_34.html. Watch this space for more tutorials soon.﻿
Posted by Unknown at 3:19 PM No comments: Links to this post

After receiving an email from Ebay to say that the subscription for stores is now increasing from $25 per month to $50 per month, plus you still need to pay a listing fee, plus they still take 7% of the final value fee, I have no choice other than to close the Ebay store I have held for 5 years. I do hope this doesn't cause any inconvenience to my loyal and much valued customers. You can still purchase all my art tutorials and commissioned portraits from my website at www.karenhullart.com or from my Etsy store. If you have any problems with either of these sites, please don't hesitate to contact me directly. I will also be adding to my tutorials on a regular basis and they are being added to a range of new sites over the coming months.
Posted by Unknown at 3:11 PM 2 comments: Links to this post

I Love You, Mum sample illustration

This is a sample illustration for Hachette Australia for a planned children's picture book, drawn with coloured pencils and markers (the sky and mountains) on drafting film. I love drawing animals on the drafting film, but one of the things I have always struggled with is getting a nice smooth sky using pencils on film. Last week I invested in the airbrush system that goes with the Tria Markers (Copic have a similar system) and used the markers that I have had for years and it worked like a dream. First time I attempted it, it didn't go so well - the key is to work from light to dark, so as to get the smoothest transition. I did the sky on the back of the film, working right across the page and then used methylated spirits to remove the marker from behind the koala and tree trunk. The mountains were also done using markers and a base coat of pale green was applied to the grassy area. The rest of the illustration was worked from the front using coloured pencil.
Posted by Unknown at 6:27 PM No comments: Links to this post