Layering Drafting film and resin for a 3D affect

As some of you know, I have been experimenting lately with using resin in my artworks, although my previous attempts have used acrylic for subsequent layers. Whilst working on my last piece, I became a bit frustrated with the way the acrylic applied to the resin and so I decided to discard it for a while and experiment with multiple layers of drafting film that had coloured pencil applied to them and then the resin in between each layer. I had a bit of an idea as to how the finished piece might look, but also had to let go of the total control I usually like to have and allow the piece to develop in its own way. The following images show the three earlier layers and how this piece developed. 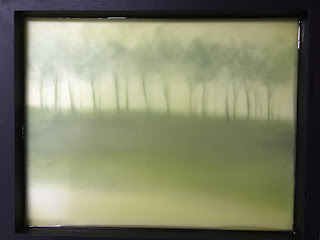 The first layer was drawn using pan pastels and the resin under this layer was tinted with avocado green resin colouring agent. 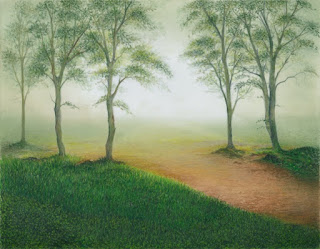 This second layer was drawn using coloured pencils and some pan pastels were also added to the back of the film to enhance the look of the disappearing horizon. As you can see, this scanned version of the second layer has a lot more detail than you can see in the final piece, but I really wasn't disappointed to lose that clarity - it added to the misty effect I was after. 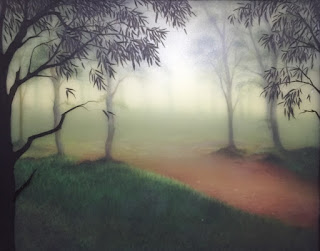 This image shows the third layer after it has been added to the other two layers. This layer was drawn using only a black Polychromo pencil.

What a lot of work, Karen!! But the effects are magnificent! How beautiful!

This is sooooo cool!

Thank you ladies for your lovely comments - much appreciated xx